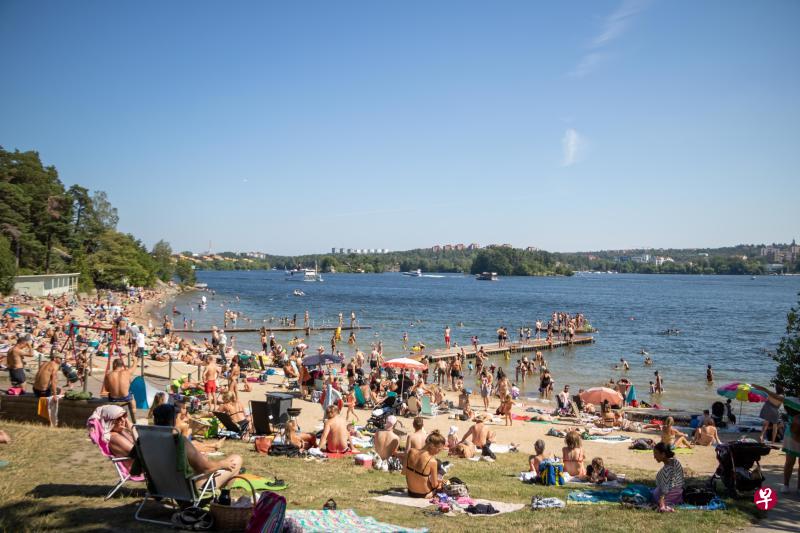 In Sweden, the most extreme heat has headed straight for the country’s far north.

On Friday, the small town of Markusvinsa in the far north recorded a temperature of 34.8 deg C, the highest mark reached in all of Sweden so far this year.

“That’s the hottest temperature in the far north since 1945 and the third-highest temperature on record,” SMHI meteorologist Jon Jorpeland told Agence France-Presse.

The tropical heat was also being felt in other Nordic countries, and the Norwegian Meteorological Institute said yesterday that it had recorded “tropical nights” in 20 different locations in southern Norway.

Heat warnings have been issued in Sweden, Norway and Finland, and last week, Finnish police even warned motorists to be mindful of moose, which were increasingly crossing roads in search of water to quench their thirst.

Meanwhile, the heatwave that smashed national temperature records in Belgium, Germany and the Netherlands, and which baked Paris in its highest-ever temperature of 42.6 deg C in the middle of last week, has dissipated a little, but many travellers faced disrupted journeys.

The mercury dived in France with outbreaks of drizzle as state weather service Meteo-France lifted red alerts imposed in 20 departments.

In Germany, the country’s highest mountain Zugspitze – standing at 2,962m – was still almost completely covered in snow despite a national temperature record of 42.6 deg C in the north on Thursday.

“The thick snow cover has provided a buffer against (the mountain) absorbing the high temperatures this year,” a spokesman for the research station at Zugspitze said.

Flights at London’s Heathrow and Gatwick airports were cancelled and delayed – some by more than two hours – with holiday destinations such as Alicante, Rome and Lisbon affected.

Elsewhere in the British capital, there was still travel havoc due to rails buckling under the heat and fires breaking out along commuter lines.

Thalys – which links Paris to Brussels, Amsterdam and Cologne – also saw disruption, with slow trains amid fears that infrastructure could overheat.

At the peak of the heatwave, temperatures on the tracks soared to up to 15 deg C higher than that of the air.

In Switzerland, train engineers painted rails white to reflect the heat of the sun.

In northern and central France, the heatwave has been particularly brutal in the countryside, aggravating fires which have seen thousands of hectares of crops destroyed.

“More than 3,200ha have already gone up in flames since the start of summer,” Interior Minister Christophe Castaner said.