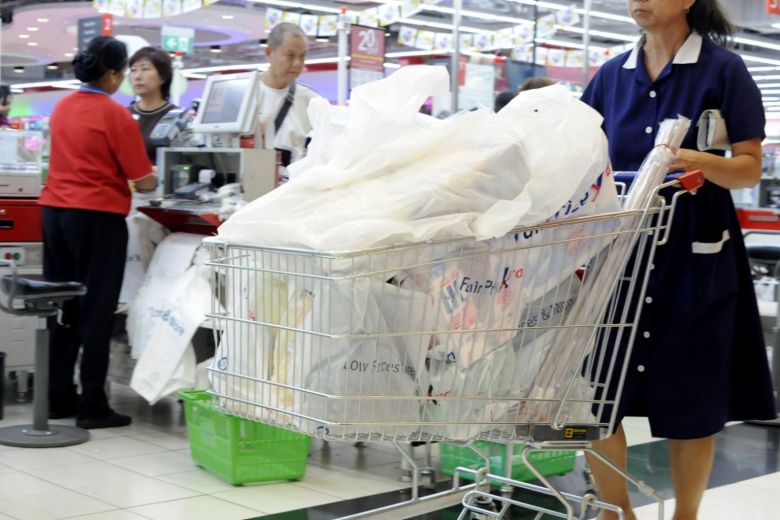 FairPrice to charge for plastic bags, McDonald’s to stop providing plastic straws at some outlets

Both companies announced on Wednesday (Sept 4) that they will be trialling initiatives to cut down on plastic bags and plastic packaging.

NTUC FairPrice will start charging 10 cents and 20 cents for plastic bags at seven outlets in a month-long trial, starting from Sept 16.

The “No Plastic Bag” trial will encourage shoppers to use their own bags, FairPrice said in a statement on Wednesday.

Over at McDonald’s, 10 outlets have stopped carrying plastic straws and have replaced certain single-use plastic items with more sustainable alternatives. This trial started on Sept 1 and will last for the month.

According to a McDonald’s spokesman, the 10 outlets have switched the plastic packaging for their McFlurry cups and saucers to food-grade paper packaging, and are using cutlery and stirrers made from food-grade wood material.

The spokesman said no replacement straws would be offered for now, and that McDonald’s would monitor consumer sentiment.

“During this period, we will monitor the sentiments of our valued customers closely and keep track of its feasibility in Singapore before making the decision to implement this change in all our restaurants islandwide,” the spokesman said.

The trial is part of the fast-food chain’s approach to “drive environmentally sustainable practices in our restaurants, including packaging, energy efficiency, waste management and green restaurant design”.

FairPrice will also be conducting a consumer sentiment survey on plastic bag usage alongside its trial.

NTUC FairPrice chief executive officer Seah Kian Peng said: “The insights we gain from this trial and the consumer sentiment study will help in developing a well-informed, measured and sustainable actionable plan to reduce plastic bag use.”

FairPrice also announced on Wednesday that it is inviting Singaporeans to submit proposals to reduce plastic and food waste in Singapore. It will be launching a new $1 million FairPrice Sustainability Fund to sponsor accepted projects.

FairPrice said that these environmental initiatives will get it closer to its target of saving 30 million plastic bags each year by 2030.

Shoppers that ST spoke to said they would not mind paying for plastic bags.

Manager Esther Tor, 61, said she uses the plastic bags from her supermarket shopping trips to line her trash bin at home.

“Since I need them for rubbish, I don’t mind paying. The charge will also help me to remember to bring my own bag if I don’t need any more plastic bags,” she said.

Editor Sheri Goh, 43, said it is about time that supermarkets charge for bags.

“We should pay for them if we want them. Many other countries like Australia and Holland have been charging for plastic bags for years already,” she said, adding that free plastic bags have always been a privilege but not a right.

These initiatives come on the back of earlier efforts by various supermarket chains to encourage more environmentally-friendly habits among customers, especially with greater awareness of the impact of human actions on our surroundings.

In July this year, eight supermarket outlets – two of each from Cold Storage, FairPrice, Prime Supermarket and Sheng Siong – placed donation bins in their vincinities to collect unused reusable bags from patrons. After ensuring they were in good condition, these outlets redistributed the bags collected for shoppers’ use.

Besides supermarkets, other businesses have also attempted to tackle excessive plastic waste by charging customers for plastic bags.

Notably, fashion giant H&M announced in July it would start charging customers for each plastic or paper bag used.

These efforts are in line with Singapore’s Year Towards Zero Waste this year, which aims to raise awareness of the need to reduce wastage.