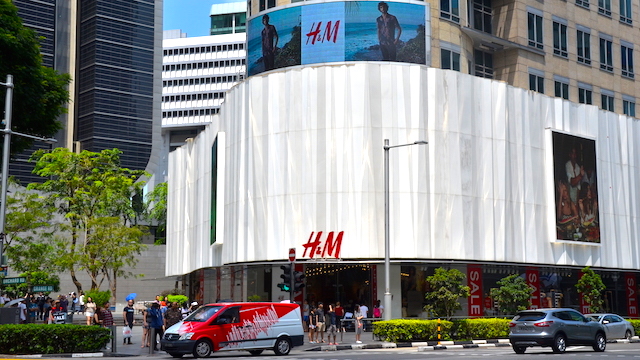 H&M to charge for plastic bags

Fashion giant H&M will soon start charging customers in Singapore 10 cents for each plastic or paper bag as part of a new initiative to reduce waste.

The move, which takes effect at all H&M stores from next Thursday (July 25), is part of a packaging strategy to reduce plastic use in the long run, said the Swedish retailer in a press release on Monday (July 15).

All proceeds collected from the shopping bag charge will be donated to WWF Singapore’s Plastic ACTion (PACT) initiative, which is an industry-wide initiative to reduce plastic use by 2030.

Shoppers who patronise the fashion giant have welcomed the move against plastic use.

Graphic designer Audrey Ng, 25, who shops at H&M every other month, said she does not mind paying for a bag.

“If I really needed a bag, then why not pay for it? It’s 10 cents, which is not expensive and the money also goes to a good cause.”

Ms Ng added that the charge would also cause shoppers to determine if they really needed a bag before accepting one.

Civil servant Ginny Goh, 44, said that while she does not think plastic bags should be banned entirely, charging for them is the right move.

“I think all single-use bags should be chargeable. We need to drastically cut down on their use and the only way is to charge. This way, people will only take what they need.”

Ms Goh’s two teenage daughters also shop at H&M and she regularly encourages them to bring their own bags.

“I don’t think it’s a big deal to charge for bags. People will get used to it. In many other countries, bags are already chargeable everywhere, in the shops and in the supermarkets.”

H&M has already rolled out charges for shopping bags in other countries including Sweden, Malaysia, the United Kingdom, Japan and Switzerland.

H&M is not the first company in Singapore to charge for shopping bags.

In October last year, the Cotton On Group embarked on a similar programme to phase out plastic shopping bags from all its stores worldwide, including in Singapore. The fashion chain now provides shoppers with recyclable paper bags which cost 10 cents each.

Cosmetics and skincare company The Body Shop stopped providing plastic bags in January 2018, and it also charges 10 cents for each recyclable paper bag.

Lifestyle brand Miniso and clothing chain Bossini have also been charging 10 cents for a bag since 2017 and 2012 respectively.

Swedish furniture giant Ikea started charging for plastic bags in 2007 before phasing them out in 2013. Today, shoppers must bring their own bags or buy a reusable polypropylene bag at 90 cents each.

Asked about customer reaction to the zero plastic bag policy, the head of sustainability for Ikea South-east Asia, Ms Soh Bee Lian, said there was almost no negative reaction.

“We believe that Singaporeans want to do what they can for the environment,” she said.

Speaking about H&M’s initiative, the company’s country manager for South-east Asia, Mr Fredrik Famm, said: “To create a more sustainable fashion future, we need to take the lead by tackling some of the most significant challenges that are facing our planet and society.”

WWF Singapore chief executive officer  Maureen DeRooij said that H&M’s move comes at a crucial time when bold action is needed to change how plastics are produced, used and disposed off.

“A bag charge, proven to be effective in reducing plastic use, is a crucial step that retail businesses can take to stop plastic pollution,” she said.